A decade after they debuted their first Surface device, Microsoft is releasing one of its biggest updates to the Surface lineup – with a new Surface Pro and Surface Laptop, alongside an updated Surface Studio and a new selection of accessories.

Following Microsoft’s first live conference since the pandemic, Ignite, we now have information about the Surface Pro 9, Surface Laptop 5, Surface Studio 2 Plus, Adaptive Accessories, an Audio Dock, new accessories and software, and even integration with Apple Music.

Continue reading to find out which hardware, software, and accessories were revealed at Microsoft Ignite.

Microsoft is introducing two new Surface Pro tablets, but the catch is they are both called the “Surface 9.”

The ninth-generation Surface Pro gives you the option of either an x86 Intel 12-gen Core or Evo processor or a 5G Arm-compatible SQ3 system-on-chip – the latter being a customized Snapdragon 8cx Gen 3 developed with Qualcomm.

The Arm-based systems are only available with 8GB and 16GB of DDR4 memory.

However, both versions have the option of removable SSDs with four options available for Intel (128GB, 256GB, 512GB, 1TB) and three options for the Arm version with a maximum of 512GB.

Surface Pro models with 256GB or more also feature Intel’s Xe graphics, which is a massive boost to the company’s prior UHD 620 graphics.

The SQ3 processor included in the Arm unit has a built-in neural processing unit which is used to deliver computer vision-based (AI) camera extensions that frame photos for you, correct gaze positions in video chats, and automatically blur backgrounds without overloading your device. The NPU (neural processing unit) in the SQ3 model also adds plenty of power to the chipset, clocking in at over 15 trillion operations per second.

When it comes to color selection, the Arm version comes in only Platinum, while the Intel version is available in the same colors as last year plus the all-new Forest Green.

While there’s no weight difference between the two Surface 9 models, if you get the 5G version, it will weigh slightly more due to the additional antennae necessary for mmWave support. 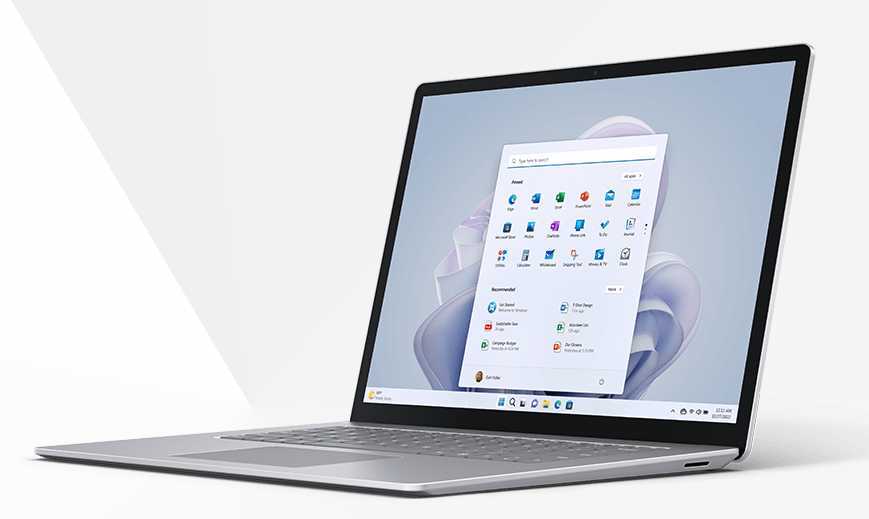 An unexpected change comes in the form of ditching AMD processors for 12-generation Intel chips. The 12-gen processors have a hybrid architecture that mixes high-performance and efficiency cores, for a total of 10 cores and 12 threads. This is actually a big upgrade from the previously available 4 cores and 8 threads on previous iterations.

The 13.5-inch Surface Laptop 5 has the option of either an Intel Core i5 or i7 processor, while the 15-inch variant only comes with Core i7 CPUs.

Staying in line with previous iterations, this Surface Laptop mixes USB A and C ports with Microsoft’s own Surface Connect. However, on top of these ports, the Surface Laptop 5 now supports Thunderbolt 4 through the USB Type-C port. This technology debuted in 2021 with the Surface Pro 8 and Surface Laptop Studio, which allows for the support of Thunderbolt docking stations or external GPUs.

There has also been a slight refresh when it comes to color. The classic Platinum, Matte Black, and Sandstone options are still available, but Ice Blue has been replaced with Sage.

The last upgrade for the Surface Laptop 5 comes in the form of Doly Vision IQ, which will deliver a better HDR experience on your screen. In order to get the best viewing experience, Doly Vision IQ allows the screen to use ambient light sensors to optimize the HDR experience.

Popular with designers and artists, this 28” all-in-one gets an update with Studio 2+, featuring a more powerful processor and graphics processing unit. 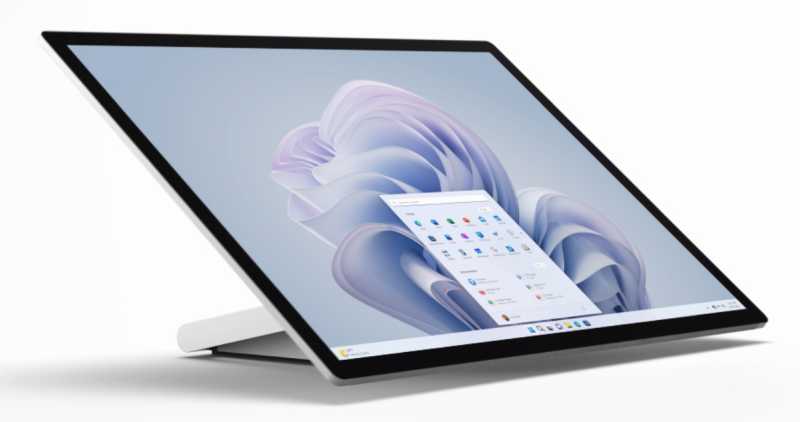 Built around an Intel 11th generation i7 and an NVIDIA GeForce 3060, the latest Surface Studio provides 50% more CPU power and twice the graphics output.

Some of the upgrades include a Core i7-11360H, the mobile version of GeForce RTX 3060, three USB-C/Thunderbolt 4 ports, and updated wireless to WiFi 6 and Bluetooth 5.1. Although its CPU is referred to as “50% faster” than the model that came out 4 years ago, this should be a given considering the previous model was 7th-gen. On top of that, even though the display is bright and has good color accuracy, it still isn’t HDR.

Although the Surface Studio 2+ is underwhelming when you consider the marginally upgraded components and specs, it doesn’t have a lot of competition in the all-in-one market. In fact, one of the only big-screen all-in-one competitors, the HP Envy 34, doesn’t even have a stylus-friendly screen or hinge.

Even though this isn’t a model typically used by consumers, it makes sense that Microsoft had to choose form over function in order to minimize heat in these newer, thinner machines.

With accessories to compliment

Some Surface users will be happy to know that Microsoft is finally shipping its adaptive accessories – a set of mice, joysticks, and buttons that can be customized with printable accessories. These accessories open up computing to a wider audience, allowing those who can’t use a traditional keyboard and mouse to finally have more options when it comes to the Surface accessories.

Although there has been a good amount of hardware released this week, Microsoft hasn’t forgotten its roots – it’s a software company. Along with new Surface models, new design applications are coming onto the market like the latest addition to the Microsoft 365 family: Microsoft Designer.

Similar to the Designer tool in Powerpoint, Microsoft Designer leverages Open AI’s DALL-E 2 AI service, which allows you to type in a few prompts and generate a design, which changes as you add new prompts or edit old ones.

You’ll be able to use Designer with the Edge browser and Bing search engine without having to change tools. The company is planning on building this application into existing programs.

So, Designer will start as a web-based preview with a limited set of tools while it’s in beta, but will eventually evolve into a premium feature for Microsoft 365 subscribers.

Alongside Designer, the company is also launching a Microsoft Create website, which will be used to curate templates and tools for all of its various design tools, including Office and Clipchamp Video Editor.

There is a lot to be excited about for Surface users, with 3 new devices, new software, and the addition of more AI – there is something in each of the new Surface devices for everyone. On top of that, with the addition of AI everywhere and NPUs in the latest Arm Surface tablets, we have a pretty good idea of what we can expect from Microsoft in the near future.

Do you want to take advantage of the latest technology while harnessing the power of both a laptop and a tablet in the same device? Try a Surface Pro Rental.

No matter which Microsoft device you need to rent for your business, Rentacomputer.com can assist with all of your temporary technology and event rental needs. In addition to Microsoft Surface products, we also offer a full lineup of computer, audiovisual, event equipment, office equipment, and any other type of business technology rentals. To enquire about a rental, it’s as easy as Requesting a Quote. As soon as you hit submit, a Tech Travel Agent will look into the rental products you described and prepare a quote for your business.

If you have any questions about any of our rental products, need help with product selection, or want to know more about the rental process you can also leave that in the quote form. Alternatively, for immediate contact, call our friendly rental representatives at 800-736-8772.