Home » We review Abby, a sleek one-plant weed farm for your apartment • TechCrunch
YOUR SHOP

We review Abby, a sleek one-plant weed farm for your apartment • TechCrunch


Abby started its journey selling 120 or so of its “All-In-One Smart Hydroponic Grow Box” on Kickstarter, with a relatively modest $100,000 raised on the crowdfunding platform. The device promises to help you make growing your favorite plants more or less foolproof, especially if your “favorite plants” are marijuana. In its marketing, the company is careful to share that you can grow any plant you like, but realistically, there are not a lot of plants that need “replacement carbon filters delivered to your house every 3 months,” and the website issues a “you must be 21 or older to enter this site” warning. The community is eager and ardent about its love for smokable plants. Let’s just say that if you’re going to spend $1,000 on a single-plant hydroponic box, you’d really have to love tomatoes for it to make sense; most of its users appear to be growing a more, er, valuable crop.

Being based in California, where these things are legal, I figured I’d give it a whirl. I bought some seeds, got the plant to about 3 inches in height, and planted it in the Abby to see what would happen.

On paper, the product should be such a solid solution. The device features a water culture system with advanced automatic intelligent lighting with Samsung’s LM301H Full Spectrum Plant Lights and high-power LEDs that are specifically designed to maximize plant photosynthesis growth potential. It supposedly has “advanced sensors to consistently track growth, with ultrasonic, temperature/humidity, water temperature, water level, and 5.8G radar sensors so you never have to worry about plant growth again.”

The product is an elegantly designed cabinet. Sleek and white, with wooden legs and a wooden top, with a bunch of smart features on the inside of the device: water pumps, lighting and what it claims are “advanced algorithms, state-of-the-art sensors” and more. Measuring around 16x16x48 inches (40x40x122 cm), it’s sleek and you could probably find a spot for it in any home.

The exploded view of the Abby shows how much thought went into the device. This is legitimately a well-designed hardware product. Image Credits: Abby

When the device arrived at my house, it had a dented door and a missing door hinge (!) which could presumably be attributed to shipping rather than poor QA. The Abby team was quick to get a replacement door shipped out, along with replacement instructions for the door, which involved unscrewing and re-screwing nine screws. I’m no stranger to taking tools to equipment, but it wasn’t the best first impression. On the whole, the hardware seems very well designed, which makes it all the more painful that, at every turn, the product’s software tries to prevent you from being able to grow efficiently. The list of issues is as long as my arm; there wasn’t an Android app for starters (the company did finally release an Android app last month), and from there, it just got worse.

The app and integration with Abby is so bad that I originally had just given up on writing a review altogether, but when the cabinet flooded my apartment floors due to a software error, I figured it might be best to write up some of my experiences…

One thing after another

Connecting to the device in the first place was impossible, and it took a fair chunk of troubleshooting to figure out what was going on; it turns out that the Abby only supports 2.4Ghz Wi-Fi, which I didn’t have set up in my house.

The app supposedly is able to give you 1-on-1 expert live support from the company, but the first few times I tried to submit a photo on my (admittedly old) iOS device, the app kept crashing. When I was finally able to upload a message, the message simply vanished. I don’t believe I ever got a reply from Abby. The app itself is riddled with typos and bugs, and I’d almost be able to look past that if it hadn’t been for the fact that the device itself doesn’t seem to have any interest in notifying me about what I need to do with the plants.

The Abby occasionally chimes at me, and pulses a pretty green light, but whenever it does that, the app doesn’t seem to have an opinion on what I need to do, and the display on the device itself — which would have been such a good place to communicate what the device needs — just shows the Abby logo. 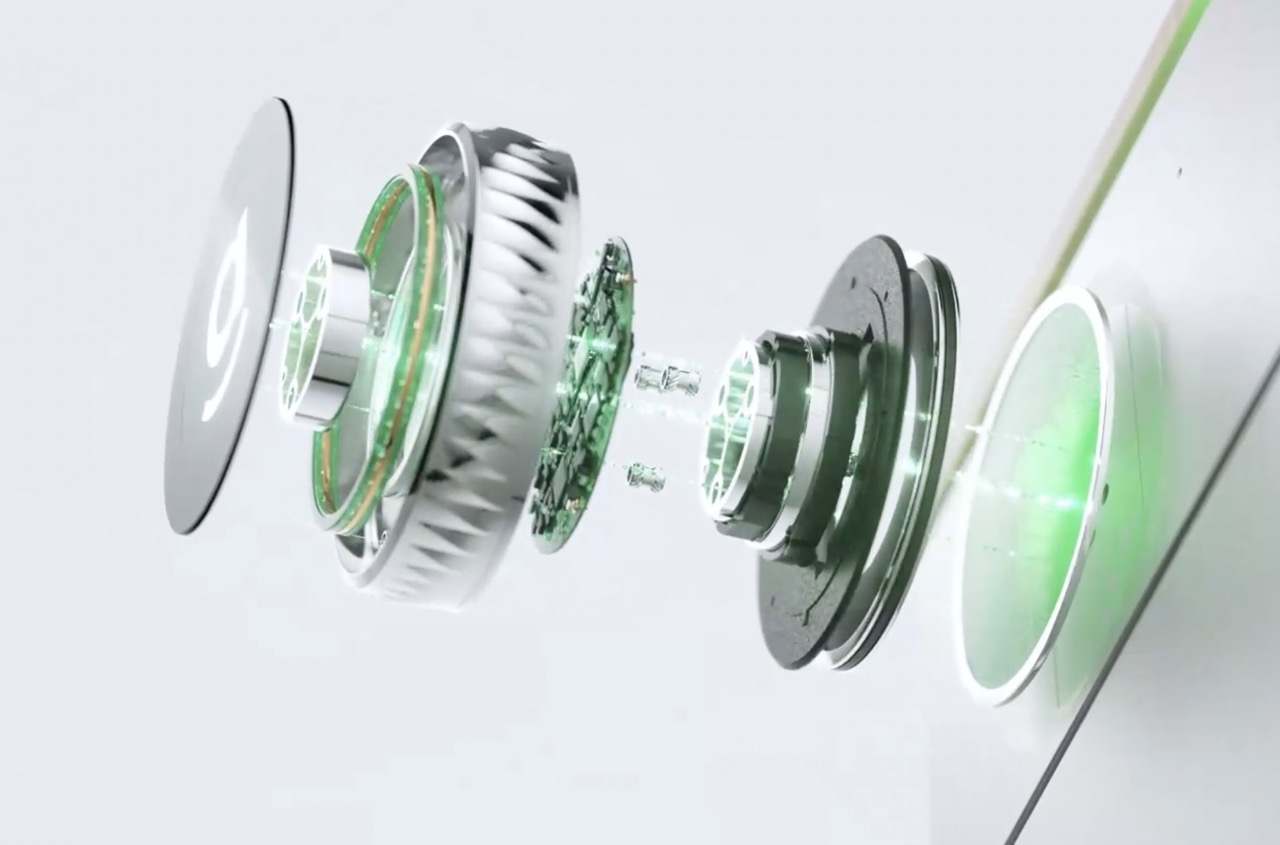 The Abby controller feels great and looks good, and the display is awesome. It’s a shame it doesn’t actually do anything other than opening the door. Image Credits: Abby.

The water needs changing every once in a while, but the app never notified me when that needed to happen. The Abby box itself has a small display on it, which rotates left and right, and has a button — much like a Nest thermostat. However, the display never shows anything useful. Such as “hey, you need to change the water,” for example.

When I finally did figure out that I needed to change the water manually, the app gives you simple instructions: Take the hose out of the box, and put it in a “minimum 1-gallon container.” Which I did, but it didn’t stop automatically after a gallon, and the app crashed when I pressed the “stop pumping water” button, which meant that the pump just kept going and sent the full amount of water in the device’s tank all over my floor as I was running to the sink with my overflowing one-gallon container. Not… ideal. 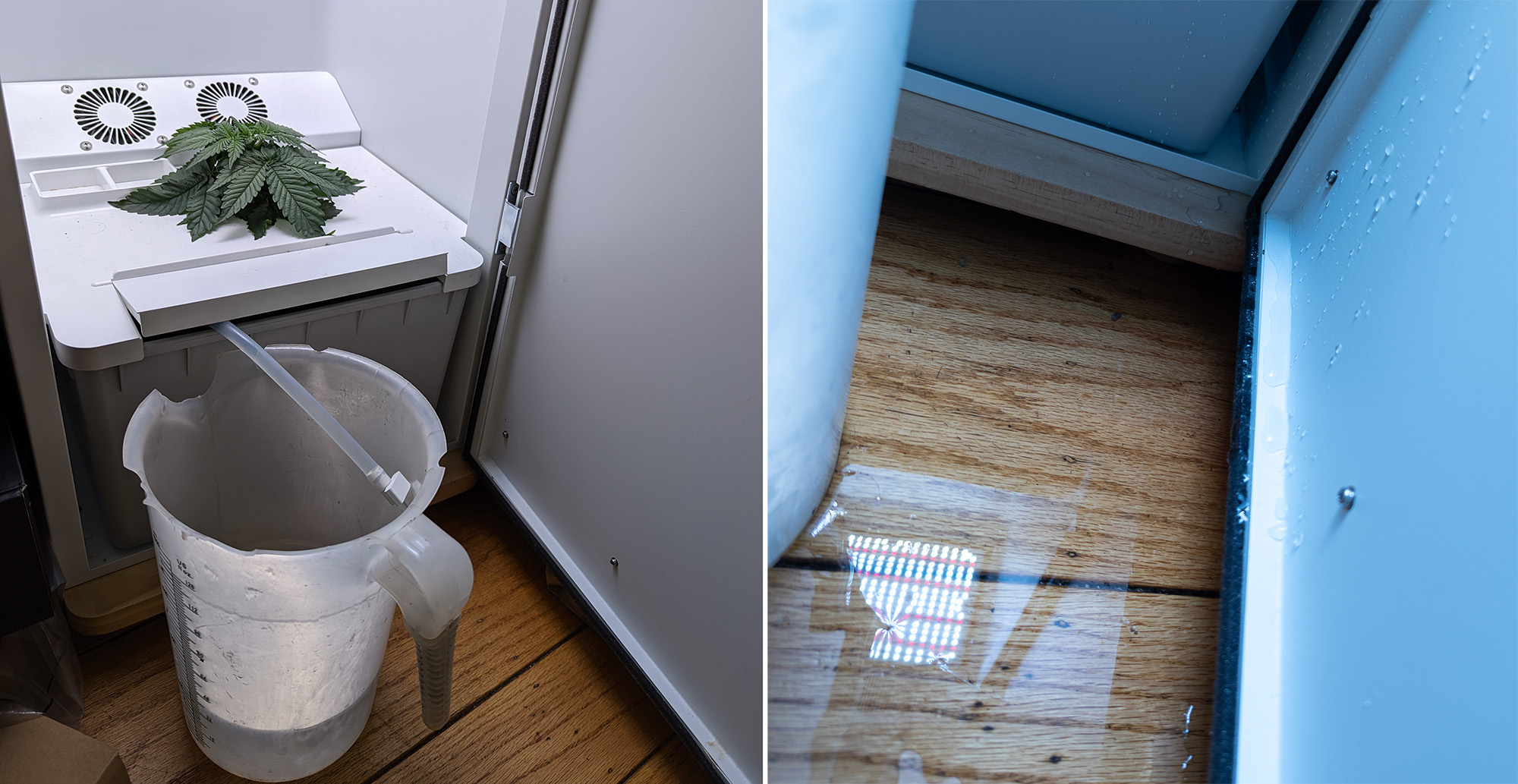 The box comes with a really clever nutrient system: It has two spots where you can place the “silver” and “gold’ nutrient packs. It does this because one of the packs needs to dissolve fully before the other one is added, to avoid a chemical reaction between the two packs. Unfortunately, this only worked the very first time I set up the machine: After that, it never asked for additional nutrition packs, so the packs I had so diligently placed in the supply holes eventually just dissolved in place, and made a sticky mess all over the machine.

Toward the end of my review period, the plant had grown quite a bit — I eventually just resorted to dumping the nutrition packets in manually, since the cabinet and app never asked for nutrients. Which seemed suspect; for my own, home-built hydroponic system, I have to balance and add more nutrients every few weeks at least. Unfortunately, because Abby never warned me that the thirsty plant drank almost all of the water, the plant went for a few days with almost all of its roots out of the water, leading to a lot of the leaves on the plant dying. Not great, and another strike against the “foolproof” nature of the Abby cabinet.

I had the Abby plugged into a power meter to see how much power it was consuming during my review. Over the course of 108 days, it burned through 198 KwH, which translates to around $50 spent for a crop of weed.

The final complaint I have about Abby is that the charcoal filters aren’t as efficient as they might need to be; especially toward the end there, my apartment stank to high heaven of weed. Not the best first impression for my landlord and a plumber when they came by to repair something. I did manage to stammer “Er, it’s for work?” which was true, of course, but… yeah. Not great.

I should add that the app is in active development, and a lot of the original complaints I had about the device have been addressed, at least partially. The company launched an Android version, and the process for changing water was “optimized” last month. How-tos and troubleshooting instructions are built in to the app, and more detailed instructions are being added. The company is also adding a growing calendar, metric units and later batches of the device are quieter than the one I reviewed (the company claims it hums along at 40 dB now, which is an improvement).

All in all, you’d have to be very interested in growing a plant indoors if you’re willing to drop a grand for the admittedly neat hardware that’s so heavily hampered by impossible-to-use, buggy software) and $50 worth of power to keep it all growing. It’s frustrating; I really wanted to love Abby, but ultimately it needed way too much manual babysitting to warrant the cost. If someone launches a product that actually delivers on Abby’s promises, I can imagine it being a great buy. This ain’t it yet.

Congressman Donald McEachin Passes Away At 61

5 Ways to Keep Your Teeth White, According to Dentist